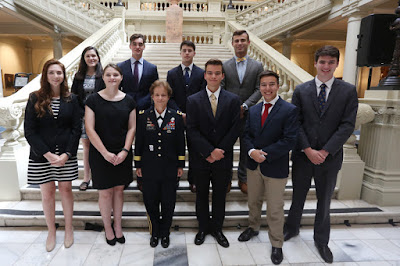 From The Post Searchlight 6/13/18
Governor Nathan Deal held a Military Academy Send Off at the State Capital, followed with a luncheon at the Capital City Club on June 5, 2018 for the 130 high school seniors from across the State of Georgia who received appointments and will be entering the five U.S. military service academies (USAFA, USCGA, USMA, USMMA, and USNA) this summer.
One of the attendees was recent GCA graduate, John York, who will be entering the USMMA at the end of June.
The speaker at the Send Off was Brigadier General Diana Holland; a distinguish graduate of the USMA (Class of 1990). Her military service includes tours in Germany, Iraq (Operation of Freedom), Afghanistan (three tours), and Commandant of Cadets at the USMA. Her awards and decorations include the Distinguished Service Medal, Legion of Merit with Oak Leaf Cluster, Bronze Star with two Oak Leaf Clusters, the Defense Meritorious Service Medal, the Meritorious Service Medal with four Oak Leaf Clusters Medal and the Combat Action Badge, the Senior Parachutist Badge, the German Parachutist Badge, and the Silver Order of the de Fleury Medal. She is currently serving as the Commander US Army Corps of Engineers, South Atlantic Division.