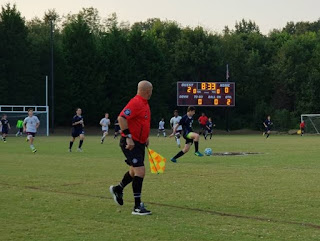 The Grace Cougars soccer team extends its win streak to 6 matches with an impressive 3-0 victory over the Peachtree Panthers on the road in Covington, GA.

Grace scored in the 18th minute when Sophomore Jack Holden scored his 4th goal of the season on a break away play where he muscled a shot through the Peachtree Goalie’s hands. In the 29th minute of play Senior Defender Sam McRae pushed forward from the back half with the ball and sent a pass to Senior Forward Gavyn Albritton who blasted a shot from 25 yards out to give Grace a 2-0 lead at the half. With Grace getting several opportunities to score in the 2nd half they finally connected in the 72nd minute when Junior Defender Jeb Smith who was playing at the right Forward position had a break away with one Peachtree Defender to beat. As Smith was closing in to the defender he played a perfect cross over to Jack Holden who was trailing the play at the Center Forward position and easily scored his 2nd goal of the game ti give Grace a 3-0 lead. Grace out shot the Panthers 14-4 with several missed opportunities by Wyatt Carpenter, Spence Butler, Daniel Jones, Sam McRae, and Jeb Smith. “Gavyn and Jeb who had one on one opportunities with the goalie are going to want those chances back” Coach Albritton said.
The Cougars defense continues to show why they lead the GICAA Conference with fewest number of goals allowed in the state by delivering their 4th shut out of the season. Sam McRae, Corban Walsingham, Collin Woodrum, and Jeb Smith are quickly making a name for themselves as one of the best defensive units in the state. It was great to have Goalie DeAndre Rogers back in the goal who had another solid performance with 4 great saves. Other key contributions were made by Blake Rykard, Jackson McConnell, Shane Kornmeier, and Chasen Wood. “Wood took a physical beating out there today but refused to come out of the match until I forced him to sit after a head to head collision during a scramble for the ball. He is one tough competitor and shores up a solid performance by our Midfielders” Albritton said.
Grace will be on the road Monday against Open Bible Christian Academy in Valdosta and then will host Peachtree Christian Academy on Saturday, September 23rd. The Saturday match against Peachtree is an important game for two reasons. First, if the Cougars are victorious they will win the South Region of the GICAA Conference and host a state playoff game in October, and second, Grace will be honoring our seniors that day. We invite everyone to come out and cheer on the Cougars! 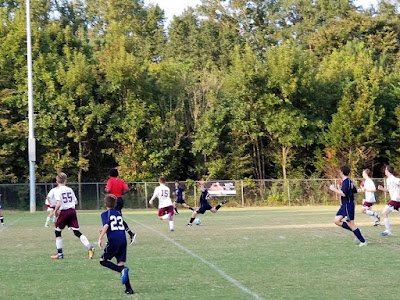