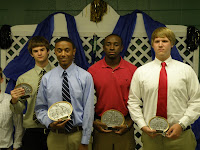 Basketball: Seniors Anthony Henderson and Leonard Sheppard were honored as teh Co-MVP’s for the year. The Coaches Award went to Jarad Long and Jon Ward received the Character and Most Improved Award.
Soccer: Offensive Player of the Year went to Marcus King, Jon Ward received the Defensive Player award and Kyle Harris was named the MVP of the Region Champion Varsity Soccer Team. Congratulations Guys for a great season!