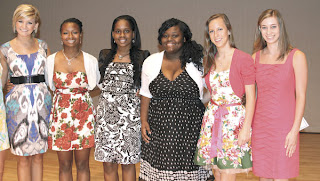 In June, six local high school juniors went to Georgia Southern University in Statesboro to join approximately 300 other girls in setting up the Mythical State of Georgia Girls State. Girls State is sponsored by The American Legion Auxiliary. Girls State is a government-oriented state, made up of 12 cities, four counties and an elected governor. The girls learn about government by campaigning, voting and electing their own officials and learn flag etiquette by raising and lowering the flag everyday. The girls return home with a better understanding of being a good citizen. From left are Morgan Rogers, Shemelia Bush, Tamara Gibson, Jodie Sanders, Emily Ward and Abbey Smith. Congratulations Abbey!!