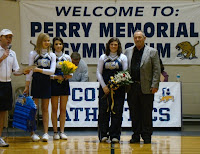 Monday, January 25th GCA celebrated Seniors Night during the SGA basketball game. Elisabeth Soden was recognized and honored for her Basketball career while Laura Leigh Andrews was recognized and honored for her Cheerleading career at Grace.
Elisabeth has played basketball at Grace since the 6th grade where she has scored 300 points and had 500 rebounds. This year alone she has contributed 61 total rebounds, 10 steals, 5 assists and 4 blocks. Elisabeth has also been a part of the GCA cheerleading squad during her years at GCA. Elisabeth is the daughter of Randy and Elisa Soden.
Laura Leigh is the daughter of Michael Andrews and Kim Newberry. She has participated in the GCA Cheerleading program for 8 years, cheering on the JV squad for 4 years and on the Varsity and Competition squads for 4 years. In 2007 she was a member of the competition squad that competed and placed 2nd in the nation in their division, and in 2008 the squad competed and won the PCC Conference Championship and took 1st place in their division at the CCA National Competition. Laura Leigh has received the Heart and Spirit Award and was selected in 2008 as a PCC all-conference cheerleader.