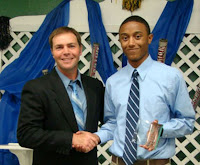 Congratulations to Senior, Anthony Henderson for being honored with The Academic Award for his stellar academic career throughout his high school career at GCA.

Volleyball – Brock Bailey was named the Most Valuable Player on offense and Emma Heard was selected MVP on defense. Alex McLendon was the Most Improved and Mogan Baker received the award for leadership.

Girls Basketball: Defensive Player of the Year went to Logan Worsham and Brock Bailey was awarded the MVP award. The Most Improved Player was Jocelyn Jacobs and the Coaches Award for Leadership went to Ladson Simmons.

Softball: Award winners were Brock Bailey with the Coaches Award; Jessica Register received the Top Bat Award; and Morgan Baker and Emma Heard received the Co-Defensive players of the year.

Baseball: Tyler Friday and Taylor McDonald were selected as Co-MVP’s; T.J. Carlisle won the Most Improved and Grand McDonald received the Workhorse Award.