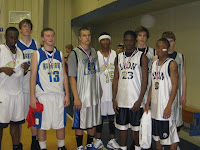 Two of GCA’s boys – Anthony Henderson and Leonard Sheppard were selected to play in the East/West All Star game on Saturday, February 28th. The final score was East – 73 and West -67. The team was coached by David Murray from Emmanual Christian and Robb Moss with Covenant Christian. Anthony scored 14 points and Leonard scored 12. For the first time in GCA’s history, one of our players was named MVP – Congratulations Anthony!

Several of our Grace lady cougars were also selected and played in the All Star game on February 28th. Brock Bailey was on the first team and Logan Worsham and Jasmine Kelly were selected to play on the second team. Their final score was West-80 and East -64. Congratulation girls for being selected for this honor!