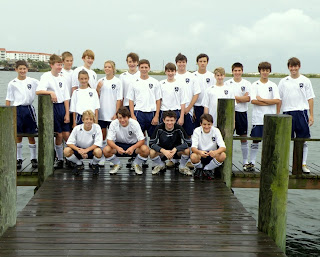 On August 27, 2010, Couch Justin Gravlee’s Cougars traveled to Fort Walton Beach, FL to compete in the Panhandle Christian Conference East – West Challenge. This tournament was created to allow teams for the East Region to compete against the teams of the West.

In their season opener, the Cougars found themselves paired against the host team, the Calvary Christian Academy Patriots. The Cougars took and early lead in the 28th minute when Kyle Harris found the back of the next from 25 yards away. The Patriots answered with a successful shot from the back post following a corner kick.

The Patriots then took the lead, scoring from close range after an initial shot was deflected by goalkeeper Grant McDonald. With one minute remaining in regulation play, Chase Harris scored the equalizer.The officials informed both teams that a penalty shoot-out would follow. Seven Cougars took kicks from the 12-yard mark, but only Taylor McDonald and Kyle Harris were able to convert their kicks. Meanwhile, three Patriots made good on their penalty kicks and Calvary was ultimately awarded the win.

The following morning, the Cougars took the rain-soaked field against the Central Christian School Saints, the winners of six consecutive PCC Championships. As was anticipated, a very physical match ensued. In the 24th minute, Bryce McQuaid guided a perfectly-placed ball past the Saints’ keeper. Throughout the game, the tenacious Cougar defense, led by Grand McDonald, was able to repel Central’s repeated attacks. When the final whistle blew, the Cougars celebrated a well-earned 1-0 victory.

Less than two hours later, the Cougars faced the Trinitas Christian Knights for the final game of the weekend. After a few minutes, it was fairly obvious that the Cougars were going to be a little flat following the emotional win earlier that day. Despite the fact, Taylor McDonald put the Cougars on the board in the 15th minute when he fired a rocket shot from just beyond the 18 yard line. Six minutes later, Trinitas answered with a shot from the back post resulting from a free kick. With only three minutes remaining and a tie game on the line, a foul was committed in the box and the officials awarded the Knights a penalty kick. The resulting kick was successful and the game ended in a 1-2 loss for the Cougars.