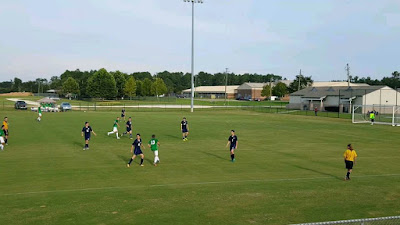 The Grace Cougars took on their toughest opponent yet down in Pensacola, FL as they faced the undefeated East Hill Christian Academy Eagles. Playing in beautiful Escambia County Soccer Stadium on a warm day this showdown lived up to everything it was billed to be. The Eagles found the back of the net first in the 6th minute of the match on a rare defensive breakdown by the Cougars defense at the top of the 18 yard line. However the Eagles lead would be short lived as the persistent pressure by the Cougars on the offensive side of the ball paid dividends when Senior Gavyn Albritton buried a superb shot from 25 yards out. After several missed chances in the first half by the Cougars the score remained 1-1 at half time.
The second half was dominated by the Cougars on both offense and defense; this was without a doubt the best match the team has played by far. Constant possession and great ball movement is what leads to great defense and scoring and that’s exactly what the Cougars displayed tonight said coach Mike Albritton. The Cougars took a 2-1 lead in the second half when Gavyn Albritton found the back of the net for his fourth goal of the season. Junior Branch Austinson assisted on the goal by Albritton. Although the Eagles had very few chances on the offensive side of the ball they certainly took advantage of them. Playing in front of their home crowd the Eagles looked to tie up the match in the second half on a corner kick and that’s exactly what they did. On a solid kick from the corner by the Eagles offense the ball was headed towards the net but was headed out by Senior Corban Walsingham who was covering the back post, only to be headed back in by the Eagles to even the score at 2-2 at the 60 minute of the match. Junior goal keeper DeAndre Rogers made a valiant play on the ball but it was simply out of his reach. I can’t speak highly enough of Rogers play in the goal this year, but that is one DeAndre is going to want back Coach Albritton added.
With the score at 2-2 and the Eagles squad seemingly on their heels the entire match, the Cougars looked to take the lead back on a corner kick as well. Senior Seth Jenkins made a run in from midfield and received a short pass from Albritton who was attempting the corner kick. This caught the Eagles defense off guard since they were expecting a pass over the mouth of the goal and it successfully drew two Eagles defenders out of the goal front. Jenkins quickly played the ball back to Albritton who successfully crossed the ball to Austinson who had slipped inside the Eagles goal keeper who missed an opportunity to punch the ball out. Austinson wisely played the ball into the back of the net without too much power and just like that the Cougars took the lead again at 3-2 with ten minutes left in the contest. Sophomore midfielder Jack Holden, Junior Chasen Wood, and Freshman Daniel Jones played key roles in maintaining possession and ending any chance the Eagles had at scoring. The thrilling match had finally come to an end with a final score of 3-2. The Cougars out shot the Eagles 22-3 and were not called for off-sides the entire match.
This was a thrilling win and the biggest of the season by far exclaimed an exhausted but proud coach Albritton. I can’t stress to everyone how far this squad has come in such a short time. They are moving the ball so well and the defense is doing an unbelievable job in protecting the den. Junior Shane Kornmeier filled in for several players tonight and his speed and athleticism was evident as he was able to get in their and mix it up on both offense and defense. In soccer speed is everything and Shane definitely has it!
The Cougars are now 3-1-1 on the season and next play on September 1st against Calvary Christian School in Fort Walton Beach.