First Game:  GCA vs Aletheia Christian Academy
Grace Christian Academy opened their 2017 campaign on the road playing in the Panhandle Invitational in Pensacola, FL. match 1 of the tournament had the tournament host team Aletheia Lions vs GCA.
The contest was a good match-up between to defensive minded teams. During the 1st half Senior Seth Jenkins was called for a controversial foul in the box against an Aletheia striker resulting in a penalty shot. Grace keeper DeAndre Rogers playing keeper for the first time missed the block and Aletheia took the lead 1-0 at the end of the 1st half. On a break away opportunity in the 2nd half Sam McRae was deliberately fouled in the box but neither a foul or card was issued. Sam was injured during the play but was able to continue.
Grace dominated the time of possession and shots on goal 15-5.
Branch Austinson led the way with 6 shots on goals with Jack Holden having 4, Gavyn Albritton having 3, with Wyatt Carpenter & Sam McRae having 1 shot each. The Lions keeper made several great saves in the 2nd half to preserve the lead.
The match ended with the Aletheia Lions holding onto a 1-0 lead. 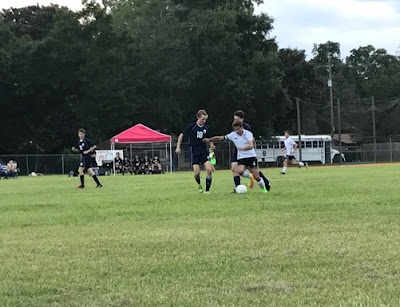 2nd Game:  GCA vs Trinitas Christian School
The 2nd match of the Panhandle Invitational had the GCA Cougars playing the Trinitas Knights from Pensacola, FL.
Once again Grace dominated possession for most of the games and shots on goal, with Grace having 19 shots vs Trinitas only having 3 shots on goal. Grace was able to score their first match of the season and the match with a beautifully played ball from the corner. Senior forward Gavyn Albritton passed the ball from the corner to another Senior, Seth Jenkins, who then turned and crossed the ball to a wide open Wyatt Carpenter who was able to put the ball in the back of the net for a 1-0 lead. The play was a twist on a set corner kick play where Jenkins ran up from defense to receive the pass Albritton who normally would cross the ball from the corner. By coming up to receive the ball from the defense instead of the set piece in front of the goal, Jenkins was able to draw three defenders away from the other Grace players in front of the goal which resulted in an easy goal for Carpenter. Wyatt Carpenter playing soccer for his first time ever is also a freshman.
still in the 1st half of the match Seth Jenkins was called again for a controversial foul in the box which resulted in a penalty shot for the Knights which they successfully made evening up the match 1-1 at half time.
The 2nd half saw Grace totally dominate possession of the ball and several shots came up just short. Keeper DeAndre Rogers had another great goal keeping the ball out of the net and the defense led by Senior Collin Woodrum was incredible.
The match ultimately ended in a 1-1 tie. 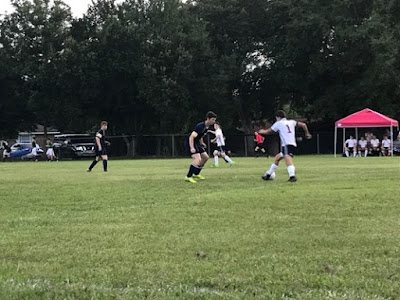 3rd and Final Game: GCA vs Bayshore Christian School
The 3rd and final match of the Panhandle Invitational had GCA playing against the Bayshore Eagles from Fairhope, AL.
The match saw Grace totally dominate possession of the ball with really no threat from the Eagles who were without their starting keeper and forward due to injury. Grace had a great opportunity when Senior Corban Walsingham was fouled in the box setting up Gavyn Albritton with an opportunity to give Grace the lead with a penalty shot. Unfortunately Albritton’s shot was wide and the score remained 0-0 at half time. Junior Branch Austinson also missed a great opportunity to score with a great shot that sailed over the cross bar.
The 2nd half saw the Cougars continue to dominate with possession and on defense. Sophomore Jack Holden opened the scoring up with a beautiful header coming off a corner kick taken by Branch Austinson. The score was 1-0 at that point but Grace would soon add another goal to go up 2-0 when Sam McRae scored down the middle with the assist coming from Corban Walsingham. McRae would score again on a beautiful assist from Freshman Daniel Jones putting the Cougars up 3-0. The Eagles would also score in the 2nd half on a break away to make the final score 3-1.
This was a great team effort! Grace out shot the opponent 16-5 with Wyatt Carpenter having the most shots on goal with 4. Senior Seth Jenkins picked up another controversial foul in the match bringing him to 3 on the season. Shane Kornmeier, Chasen Wood, Spence butler, Blake Rykard, and Jackson McConnell say several minutes of playing time in the 2nd half of this match and made key contributions. I can’t speak enough about the sacrifice made by Senior Collin Woodrum and Junior Jeb Smith on defense! Both of these players, along with Seniors Seth Jenkins & Sam McRae are accustomed to playing up front. But with them on defense it has been almost impossible to score on us unless a penalty shot is awarded. DeAndre Rogers again played a beautiful match and continues to grow into the keeper position.
Grace Cougars win the match with a final score of 3-1.