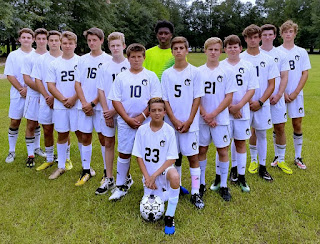 GCA vs Open Bible Christian Warriors
September 7th at 5:30 pm
The Grace Christian Academy Cougars took on the Open Bible Warriors of Valdosta, GA at home in their 7th match of the season.
The Cougars were once again without goalkeeper DeAndre Rogers for the 2nd straight match due to an ankle injury. The Cougars turned to Freshman Blake Rykard for his 2nd start at goalkeeper and he delivered another solid performance. Rykard had a total of 7 goalie saves and didn’t allow the Warriors to score. This is the 2nd straight shut-out from the Cougars stingy defense and the 3rd of the season.
The Cougars got on the board first with Forward Gavyn Albritton recording his 7th goal of the season in the 11th minute with a well played assist from Midfielder Jack Holden. In the 33rd minute of the match Jack Holden attempted a corner kick and a Warrior defender went up to clear the ball with a header and inadvertently put the ball in the net for the Cougars making the score 2-0. Defender Sam McRae would push the ball forward late in the 1st half on a break away and bury the ball in the back of the net to give the Cougars a 3-0 lead going into halftime.
With an all around solid performance by the Cougars in terms of possession, the match was never in doubt. In the 80th minute of the 2nd half Midfielder Spence Butler was fouled in the penalty box. Defender Collin Woodrum took the penalty shot and with ease pushed the lead to 4-0 giving Woodrum his 1st goal of the season. minutes later Defender Corban Walsingham got in on the scoring act by sending a shot from at least 40 yards out that caught the Warriors goalkeeper out of the net. With his shot sailing past the outstretched reach of the keeper, the Cougars would take a 5-0 lead giving Walsingham his 1st goal of the season. The match ended with the Cougars holding on to another shut-out and impressive win on the season. This is the 1st match of the season where the Cougars had 3 defenders score in a match!
With the Cougars opening the season with a loss and a tie, they have reeled off 5 straight wins and are doing quite well considering some set backs with key players out. I’m impressed with this teams ability to go to work and keep winning despite some setbacks with injuries and other situations that have kept key players out Coach Albritton said.
The Cougars play next On September 15th in Covington, GA against the Peachtree Christian Academy Panthers. This will be the 1st region game of the year for the Cougars who are playing for the first time in the GICAA Conference.