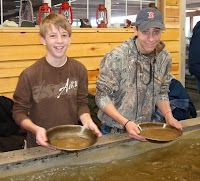 Grace Christian Academy’s 7th & 8th also got a chance to participate in GCA’s annual Trip Week and went on a tour of North Georgia from March 3rd – 5th. Twenty students, chaperones, along with GCA History Teacher, Mrs. Henderson embarked on a three day, 800 mile adventure through the State.
Even though the tour was designed to correlate with the Georgia History Curriculum, there were plenty of extra activities so that the trip was both educational and fun. For many students, this was a trip of a lifetime and will be a lasting memory of their middle school days at GCA.The trip began on Wednesday morning with a departure from Grace to Dahlonega, Georgia. The students enjoyed a tour of the Gold Mine Museum, a visit to the Consolidated Gold Mine (where they had an opportunity to pan for gold), and shopping in the wonderful downtown area. The first day was capped off with dinner at Pappasito’s in Marietta, GA.

On Thursday morning, the students had an early wake-up call before heading to Marietta for a one-hour trolley tour through this historic city. The students experienced Marietta’s rich heritage like the vibrant downtown square, the grand antebellum homes, and the battlefields at Kennesaw Mountain. The most moving part of the tour included visits to the Confederate Cemetery and the National Cemetery. After exploring Marietta, the students loaded up the vans and headed to the Atlanta Cyclorama and the Civil War Museum. The Civil War Museum features the world’s largest oil painting, the “Battle of Atlanta” and the “Texas”, one of the steam locomotives used in the Great Locomotive Chase in April of 1862. The final tour of the day included a trip to downtown Atlanta to visit one of the oldest schools in Atlanta – Georgia Institute of Technology. Georgia Tech dates back to 1882 during the Reconstruction period. The day ended with a dinner at the Varsity…”What’ll ya have?”

The final morning began at Northpoint mall for a few hours of shopping and lunch and then on to Stone Mountain Park where they enjoyed Snow Mountain and the Summit Skyride. This high-speed Swiss cable car provides a stunning view of the Confederate Memorial Carving as it transports the students more than 900 feet above ground to the top of Stone Mountain. From the top, the students witnessed an amazing view of the Atlanta skyline and the Appalachian Mountains. They had a final stop in Macon before heading back to Bainbridge.

Winter Formal...Fun Was Had By All